These photos were taken during a very cloudy November day in Glasgow. Glasgow is the largest city in Scotland and has a lot of great new architecture mixed with old industrial buildings and beautiful art nouveau houses.

The former docklands site on the south bank of the River Clyde  is the site of the Glasgow Science Centre, Glasgow Tower and the headquarter for the BBC Scotland and STV. At the opposite, the Clyde Auditorium (Armadillo) and other new buildings found their places. In addition, several new bridges spanning the River Clyde have been built, including the Clyde Arc Bridge (Squinty Bridge) and others at Tradestone and Springfield Quay.

The 1000 Bridges of Glasgow

The East End of Glasgow is the home of the Glasgow Green, which is the oldest park in the city dating back to the 15th century. In the early days, the park was an grazing area, an area to wash and bleach linen and an area to dry fishing nets.

The People’s Palace and Winter Gardens were opened on 22 January, 1898 and was intended to provide a cultural centre for the people. In 2005 further work was carried out when the Doulton Fountain was extensively refurbished and relocated to its present position in front of the People’s Palace. This 46 feet high and 70 feet across at its base, is the largest terracotta fountain in the world.

The Templeton Carpet Factory (Templeton Buisness Centre) was modelled like a buildings in Venice, because the wealthy citizens living in nearby did not wish to overlook a factory and it was decided the building should be of appropriate design for such a prominent location in the city.

Today, there have been many live music events on Glasgow green on various scales.

The Glasgow Necropolis was created on a hill above Glasgow Cathedral (High Kirk of Glasgow or St Kentigern’s or St Mungo’s Cathedral) in 1831 and is built as a Victorian Cemetery and around 50.000 individuals have been buried in approximately 3500 tombs.

The main entrance is approached by a bridge and the cemetery is laid out as an informal park, lacking the formal grid layouts of later cemeteries. The most larger monuments stand uphill towards the summit and are clustered around the John Knox Monument.

This photo was taken on an early November morning about two miles (3 km) south of Stonehaven. Dunnottar Castle is a ruined fortress located upon a rocky headland and the surviving buildings are largely of the 15th – 16th centuries. The castle plaid an important role in the history of Scotland, because of the location: it overlooked the shipping lanes to northern Scotland and on the opposite it controlled land access to the coastal south.

In the present-day, the castle was the venue of the movie “Hamlet” with Mel Gibson and Glenn Close. 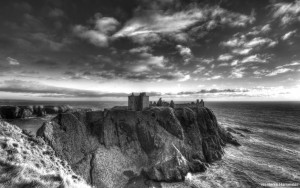 The University of Aberdeen in the dark

The University of Aberdeen was founded in 1495 by William Elphinstone, Bishop of Aberdeen and is the third oldest university in Scotland. The modern university was formed in the middle of the 19. century and merged the existing King’s College (Old Aberdeen) and the Marischal College (City Centre).

Back
November 14, 2010 Heike Comments Off on The University of Aberdeen in the dark Aberdeen, Scotland Aberdeen, Architecture, Scotland

The river Don in Seaton Park

Seaton Park is one of the city’s biggest parks in Aberdeen and the River Don passes along the park.

The ground of Balmoral Castle

Balmoral Castle is located near the village of Crathie, 10 kilometres west of Ballater and 11 kilometres east of Braemar. Balmoral has been one of the residences of the British Royal Family since 1852, when it was purchased by Queen Victoria.